Have you ever asked anybody “Hey how’s it going?” and gotten this reply?:

The next time somebody says that you to, say this to them:


“All is flux. Nothing stays still.” – Plato

We are often lulled into thinking things are the same. But the truth is, you are never staying the same - you are either getting better or you are getting worse.

A client of ours provides a great example. He was quite a bit overweight, and he never really took any steps to improve his health through exercise or better eating habits. Then one day he suddenly developed some breathing difficulties so he went to his doctor to see what the problem was.

He hadn’t been to the doctor’s office in several years. The first question his doctor asked him was “How have you been in the past couple of years?” His answer was – “Same old, same old I guess.” He found out from his doctor, however, that he had guessed wrong on his health status year over year. He was not the same old same old over that period of time.

For the last three years this young man had remained overweight, wasn’t exercising and was eating a very poor nutritional diet. On a day-to-day basis he didn’t feel any different, and until the breathing difficulty came along, he felt that his health status had just remained the same until this “sudden” difficulty in breathing came along.

He had not remained the same. There was nothing “sudden” about his breathing difficulties, according to his doctor. All of his poor habits were building up over time and they were now resulting in his weight really becoming a problem and that was leading to his shortness of breath.

“It’s like a smoker,” his doctor told him. “People smoke for years and think their health is always the same. They then get a cancer diagnosis and realize they weren’t staying the same, they were getting worse every day, they just didn’t realize it.”

Think about it. Life is made up of energy. Nothing stays static. Every minute our bodies produce new cels and we are constantly evolving. Every day the world changes, even though many of the changes are too subtle for us to see on a daily basis. Nothing remains the same.

“Nothing stays the same, nothing remains static. Which way a thing changes depends on you.” – Neale Donald Walschsch

Change isn’t something you do therefore, it’s something that is happening all the time and that you allow, whether you do anything about it or not. Eat poorly and over time, your body will pay the price. Smoke a pack of cigarettes a day and over time, you’ll pay the price. Your daily habits aren’t keeping you the same, they are either making you better or making you worse.

It’s the same thing on the opposite front. If you are constantly eating well and exercising, you are also changing – for the better. Your body is building up a strong immune system, you are getting stronger and more flexible, you are becoming healthier and you are in better condition than you were yesterday as a result.

It’s kind of like someone who loses 10 pounds on a diet. The people around them may not even notice the change so much, as it can be subtle and not really noticeable on a day-to-day basis. But when someone comes over who hasn’t seen the dieter in awhile, the reaction is usually – “Wow you lost weight, you look great!”

You are changing every moment. You are either improving your life or making it worse. Every day you exercise and eat right makes you better, every day you don’t makes it worse. As Neale Donald Walsh says, which way you change is up to you but rest assured, you are always changing. You aren’t the same.

If we got cancer the first time we smoked a cigarette, nobody would ever smoke. If we saw the benefits of healthy living immediately, we’d all practice better health habits. We change whether we want to or not, and whether we see it instantly or not.

When you really embrace the fact that your daily habits can effect good change or bad change, it becomes that much easier to embrace those positive daily habits. Is all change good? Of course not. But we can control which way the changes happen by making smart daily choices about how we want to live each day.

And even if we “do nothing” at all, we won’t stay the same. We’ll either be getting better or getting worse. So don’t be afraid of change, embrace the fact that change is always happening and do your part to make those changes more positive than negative.

Have some patience too. Do the right thing even if your results aren’t immediate. It will pay off in the long run.

Just when the caterpillar thought the world was over, remember, it turned into a butterfly. Do your part to make sure that the changes that come to you are ones that can make you fly!


Thanks for reading! Our TEAMMATES podcasts with Chris DePiero, Jim Rooney and Roger Lajoie are available at http://www.rogerlajoie.com/teammates.html. You can follow our daily Twitter tweets on Twitter and Facebook posts @TeammatesTrio. For more information on our personal developing coaching and courses, you can email teammates@rogers.com. We are always happy to help you discover the many ways to make YOUR life better by having a TEAMMATE on your side.

Have a great week! 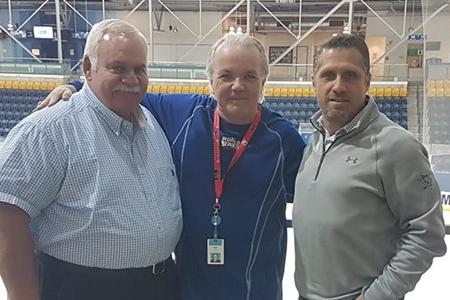 Same old same old? Nope. Things are either getting better or worse